A cooling fan is one of the most integral parts of the computer processing unit (CPU). Fans are used to draw cooler air into the unit from the outside and emit warm air from the inside. It keeps every component of the CPU at a cool temperature with the help of a heat sink.

However, ASUS users have reported a problem with their CPU fan when their computer boots up. As a preventive measure, the PC and all of its components will shut down instantly. It can also lead to other serious problems, such as overheating and component damage.

In this guide, you will learn:

So, if you have recently come across this error on your CPU, read on to learn more.

What is the CPU Fan Error on ASUS Motherboards or American Megatrends BIOS?

The CPU fan error appears on the BIOS (Basic Input/Output System) startup–it is where your computer’s hardware and memory are being initialized before booting the operating system.

In the case of ASUS motherboards, the American Megatrends logo first appears on the screen, along with other initial parts of the startup process, such as memory and hard drives. The error will soon appear with the following message:

Error: CPU Fan has turned off! 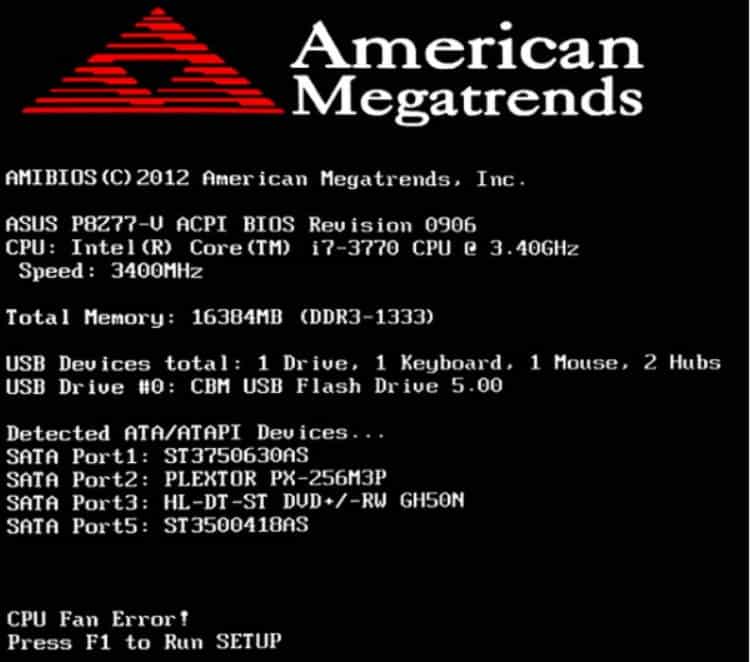 You will be prompted to press the F1 key to boot once again, but the problem will not go away. So, what are the causes for this CPU fan issue?

Main Causes for the ASUS CPU Fan Error upon Startup

If you didn’t change your CPU fan for a while, it can also be due to age or wear and tear.

How to Fix the CPU Fan Error on ASUS Motherboards

With everything else in mind, you can now begin to try the fixes listed below. Whether your issue is hardware or software-related, we got you covered.

Remember to go through each one to test out which works the best for your PC. Also, if your CPU fan was not cleaned for a while, you can first try to open your PC and clean the dust and debris that are maybe causing this error. Nonetheless, here are some fixes that you can try:

Fix #1: Ensure that the CPU Fan is Connected Properly

To fix the CPU fan connection issue, follow these steps:

Most CPU fan problems on ASUS motherboards or American Megatrends BIOS are solved once you apply this fix. If you are still experiencing the same issues, however, you can try the other ones below.

If you have installed a new CPU fan for your PC, chances are you might have improper fan settings set on your device—specifically, the fan’s RPM. ASUS motherboards will require a minimum RPM for your CPU fan, or else it will not be recognized.

Important: Before going straight to the steps below, make sure that your ASUS BIOS is up to date. Depending on your computer, you can visit the ASUS official website for the latest BIOS versions.

To change the cooling and fan settings via the BIOS, proceed to these steps:

Tip: You can also try to set the CPU Fan Speed Low Limit to Ignore and see if that fixes the CPU fan error.

As mentioned earlier, if your PC has been running for a while, chances are some of its internal hardware will have issues. Assuming that you have tried all the fixes above, you will need to replace your old CPU fan with a new one.

Not only this will help in improving your PC’s overall performance, but it will optimize the temperature of all internal hardware, especially the motherboard. Using faulty CPU fans can also further lead to overheating and hardware failure.

The CPU fan is a critical part of your PC setup. It ensures that an optimal temperature is maintained across all internal hardware while your computer is running. Several issues with the CPU fan will prevent your computer from booting properly. Therefore, these fixes should keep you informed on solving this hardware issue.