Anime is considered to be mainstream content for Otakus (anime enthusiasts) and casual viewers alike. Compared with anime, manga is a graphic novel that’s released faster due to quick publishing work. Among the most popular apps that support anime, manga, and dorama (Japanese drama) is Crunchyroll. 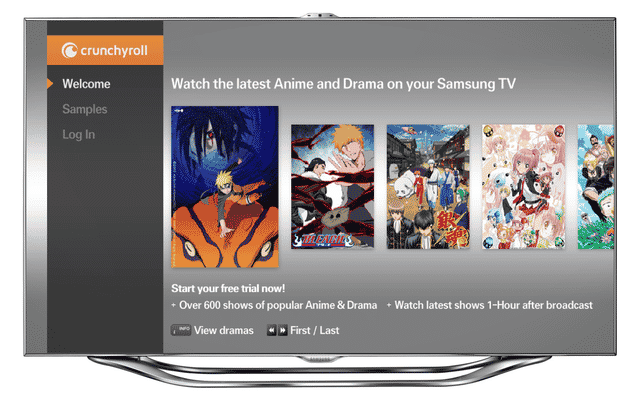 You can stream Crunchyroll for free on your computer, laptop, smartphone, and other smart devices if it supports the Crunchyroll app. However, it’s not always the case for other smart TVs such as the Samsung Smart TV. In this guide, we’ll show some workarounds when you don’t have the Crunchyroll TV app on your Samsung TV.

How to Watch Crunchyroll on TV

With Crunchyroll, you can stream high-definition (HD) anime content through your device for free. It’s a problem however if your device is not supported by Crunchyroll. To know the compatible streaming devices with the Crunchyroll TV app, refer to the list below:

Although devices such as the Samsung smart TV, Xbox 360, and Nintendo Wii had Crunchyroll support, they were eventually ruled out due to various reasons. But, there are still some methods that you can try to get Crunchyroll on Samsung TV.

How to Get Crunchyroll on Your Samsung TV

Usually, when you have a Crunchyroll account, you can stream HD anime series, dorama, and read the latest manga editions for free. But if you’re using an unsupported device like a Samsung smart TV, you can try these methods to stream Crunchyroll content directly to your smart TV.

Make sure to go over these methods one by one to see which method works best.

Method #2: Use an Over-the-Top or OTT device

Over-the-Top devices allow you to stream multimedia content through several smart devices. Usually, OTT devices are supported by various streaming services and are easy to set up once you have a stable wireless connection.

Mainstream devices such as Roku, Apple TV, Amazon Fire Stick, and Chromecast, are only a few of the OTT devices that are available in the market. After setting up an OTT device on your Samsung smart TV, you can easily watch popular streaming services such as Crunchyroll. This is also a great way to add Beachbody to your Samsung Smart TV.

If you’re using an iOS device along with your Samsung smart TV, you can use AirPlay to cast content from your iPad or iPhone to your smart TV. Samsung TV models that are 2018 or later usually support AirPlay, so just keep that in mind.

To cast Crunchyroll on your Samsung smart TV via AirPlay, follow the steps below:

Similar to AirPlay, Samsung also has its version of screencasting support via Smart View. If your Samsung device runs on Android OS 4.3 or greater, it should support Smart View. Also, besides Samsung smart TVs, you can use Smart View on various smart TVs that run an Android OS.

To cast Crunchyroll to your Samsung smart TV via Smart View, proceed to these steps:

Method #5: Connect your Computer or Laptop via HDMI

After both devices are connected, you can now navigate to the Crunchyroll website and stream your favorite anime movies and series for free.

These methods should enable you to watch Cruncyroll on your TV without any problems. If your TV is behaving oddly after one of these methods, we have an article which explains how to stop your Samsung TV turning Off and On randomly.

Crunchyroll is one of the best streaming services that offer exclusive anime, manga, and dorama content. Although it’s for free, you can watch premium and ad-free anime content from Crunchyroll once you avail of their subscription.